Will Seattle become a “15-Minute City?”

Like many urban planners and metro government leaders, Seattle Mayor Jenny Durkan has embraced the “15-Minute City” concept as one way to recover from the economic fallout of the coronavirus pandemic. Critics say that notion is unrealistic.

The “15-Minute City,” as envisioned by French academic Carlos Moreno, who is credited with coining the idea, is “simply a way to help shift priorities.” Formulated in response to the climate crisis, it is based on a human-centered design with neighborhoods retooled so they meet daily needs while being sustainable and connected.

According to Moreno, the scientific director at Pantheon Sorbonne University and an advisor to several government and non-governmental agencies, the framework of a 15-Minute City has four key characteristics. Urbanist Dan Luscher, writing in Publicola described these traits as: 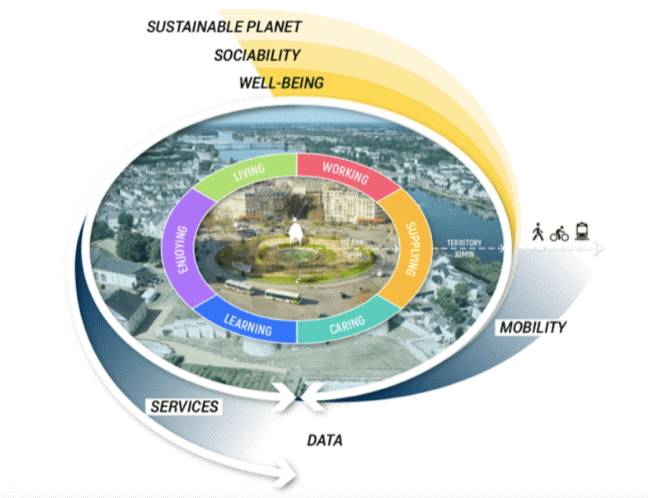 Luscher said broad public engagement and buy-in are essential to implementation, along with detailed measurement and analysis, cost-effectiveness, and the involvement of “all types of actors” – not just urban planners or government agencies. Among the organizations and groups he listed are neighborhood leaders, nonprofits, entrepreneurs, investors, business organizations, and academia.

Seattle is among members of the international C40 Cities Climate Leadership Group that pledges to move toward a 15-Minute City model as a key action that is “critical to achieving a vision for a green and just recovery – and a future that works for everyone.”

In her “Durkan Digest” published in mid-September, Seattle Mayor Jenny Durkan reported she had directed the city’s Office of Planning and Community Development to “explore the concept of a 15 Minute City as a potential framework for the next major Comprehensive Plan.

Durkan is a member of the Global Mayors COVID Recovery Task Force, which over the summer adopted an agenda for a “Green and Just Recovery.” The group recognizes the 15-Minute City as an idea that can shape efforts to mitigate the worsening climate crisis, as well as a “potent and powerful concept for cities that are serious about addressing livability, urban isolation, and housing inequality.”

Seattle architect Mike Eliason, who focuses on passivhaus buildings, social housing and livable cities, expressed reservations about Seattle’s ability to become a 15-Minute City in a guest editorial in Publicola. He asserts Seattle has no “fully realized” pedestrian zones and the city’s low-traffic “Stay Healthy Streets” are located mostly in single-family neighborhoods “away from businesses, parks, and apartments.” Additionally, he references Mayor Durkan’s proposed 2021 budget that cuts tens of millions of dollars for safe streets and nonmotorized transportation, saying, “This is not climate leadership.”

Noting Seattle’s next major Comprehensive Plan update won’t be adopted until 2024 and a decade thereafter to be realized, Eliason said such a “framework that delays the transformation cities need to adapt to climate change (and COVID 19) for this long is neither climate action nor a path to economic recovery.”

Eliason also criticizes Durkan for a lack of action and leadership, saying Seattle’s mayor “like nearly every other U.S. mayor, is not making a city for my children.” He contends the 15-Minute City must be “fast-tracked today, and implemented in full, ideally with strong support from the state and federal levels.”

Among other detractors of the 15-Minute City are NIMBY groups, many historic preservationists, and “anyone else who fears his home value will collapse without the exclusive building and zoning standards that have historically perpetuated segregation,” according to Kea Wilson, senior editor at StreetsBlogUSA.

In her July 31 blog, Wilson quoted Flavio Coppola, program manager for urban planning at C40 Cities, who said there are several key indicators that contribute to a premise underlying the concept of a 15-Minute City. Cities could ask themselves questions like: Do your residents have fresh food outlets in their neighborhoods? Is there a presence of critical public infrastructure, like good grade schools, within 15 minutes of most places? If you can’t reach the high school in a 15-minute bike ride, can a high-schooler at least reach it on transit? As envisioned by Moreno, public school buildings would be repurposed on evenings, weekends, and periods when school is not in session and used for cultural and civic events, or  other programs.

Zoning reform will be needed for most cities to achieve 15-minute cityhood.

While Seattle boasts a few “urban villages,” they constitute only a fraction of the city. Notwithstanding its steep hills and large bodies of water, Seattle’s more daunting challenge would be zoning changes to allow more housing and a broader mix of housing in single-family zones. (Currently, of Seattle’s 36,884 total acres, 24,699 (approx. 67%) are in the single family zoning group, according to research by Rachel Ludwick at Fancy Beans. She notes several caveats when calculating depending on which sources and zoning groups are included. Other sources peg the percentage of Seattle’s land zoned to only allow standalone, single family homes at 75-to-80 %.)

Paris is considered the “poster child” for a shift that accommodates bikes and walkers. With the onset of pandemic induced lockdowns, it installed what is dubbed “corona cycleways” to ease transit crowding. The city installed 50 kilometers of pop-up bike lanes as a deliverable championed by Mayor Anne Hidalgo as part of her platform while campaigning for re-election this year.

Other cities are reimagining their infrastructures and touting green stimulus plans in their quest for a post-pandemic recovery. In a roundup of far-ranging examples, Bloomberg City Lab cited projects in Milan, Italy; Tallinn, Estonia; Ottawa, Canada, London, New York City and Portland, Oregon.