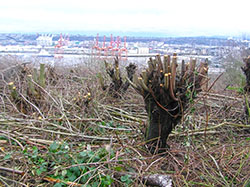 Nine homeowners agreed to pay the city of Seattle a fine of $360,000 for cutting 153 trees along a greenbelt in West Seattle.

Last month’s settlement follows a lawsuit settled in 2017 when owners were fined $440,000. Taken together, the fines levied against owners who tried to improve their views and property values amount to $5,229 per tree.

In announcing the latest fine, City Attorney Pete Holmes said the lawsuits “demonstrate the City’s commitment to the protection of the public’s green spaces.  In addition to recovering money for the City to restore such spaces, the settlements serve as a deterrent to future cutting and provide notice that the City will seek damages where others harm our natural resources.”

To date, parks personnel and volunteers have installed more than 5,500 native plants, including 620 saplings. The remediation effort is aimed at restoring what is considered a critical environmental area.

The unpermitted tree cutting was near the 3200 block of 35th Avenue Southwest. The felled trees were along a slope considered vulnerable in the event of an earthquake.