“Up” house not coming down after all 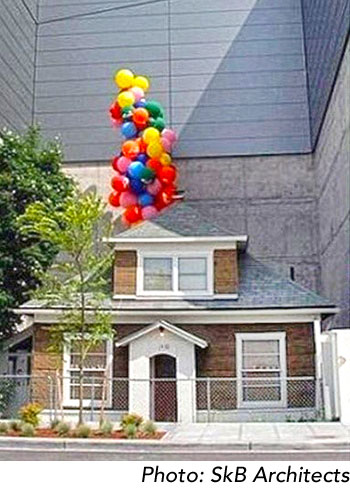 Although the storied “Up” house in Ballard was saved from coming down, its ultimate fate is still not certain as property owners proceed with redeveloping the 2.5 acre site where the quaint bungalow sits.

In response to rumors that were circulating in mid-April about the impending demolition of the storied Edith Macefield House, used by Disney to publicize its 2009 film “Up,” owners Regency Centers joined a “No Demo Day” rally held on April 21. The owner-operator-developer of mixed use developments hosted coffee and donuts as an estimated 400 community members tied balloons to the fence in front of the house.

“The event really highlighted how symbolic the house is to locals and what is represents,’ said Neda Mahdavian, senior property manager at Regency’s Seattle office. “To the Ballard community, it’s a symbol of stalwart resistance and fighting for what you believe in,” she stated. Being onboard with this movement “reiterates how much we value community engagement at our centers and ultimately doing what is right – one of our core values,” she added.

Regency Managing Director Craig Ramey told the My Ballard neighborhood blog the company was exploring ideas to update the house to integrate it with the under-construction Ballard Blocks II. Possible repurposing includes a community and event space, a pop-up space for local eateries, and a flower shop.

Ballard Blocks II, slated for completion in mid-2019, will contain 115,000 square feet of office and retail space. In addition a PCC Natural Grocer, the anchor tenant, it will include West Marine, a Bright Horizons learning center, two floors of office space, a rooftop amenity area, and 310 parking stalls.

Regency Centers, a real estate investment trust, anticipates spending more than $31 million on “BBII” as its share of development costs in a 50/50 joint venture with Principal Financial.

Edith Macefield lived in the “Up” house, which she called Whitewood Cottage, from 1952 until her death at age 86 in 2008. Two years earlier she reportedly refused an offer of $1 million for her home to make way for a commercial development.

In a 2015 report about her mysterious life and the home, Seattle Times reporter Jayson Jenks wrote, “She became a cause célèbre, the little old lady who said no to big developers. . . Her story spread virally from Seattle to faraway places like London, and soon her house was everywhere, for everyone.”