“We have a generational opportunity before us to bend the arc so more people can live in Seattle,” proclaimed Seattle Mayor Jenny Durkan as she outlined her vision for addressing Seattle’s housing crisis. She also announced an ambitious plan called “Housing Seattle Now” for investing in housing for low- and middle-income families.

“The lack of affordable housing is helping fuel our homelessness crisis,” stated the mayor last month during remarks at a community event on Capitol Hill.

Durkan also emphasized “a sense of urgency” as she pledged to use new tools and to seize new opportunities and collaborations. “We will do it together with community,” she vowed.

In unveiling the “Housing Seattle Now” program, Durkan told the gathering, “We have a vision for housing that protects against gentrification and displacement, and makes it possible for families to stay in Seattle.”

The first initiative, proposing $50 million, would enable building housing without raising taxes by using a program state lawmakers approved this year. Under those new provisions, local jurisdictions have flexibility to bond against sales tax revenue for capital dollars to build apartments, or to generate operational monies to maintain existing housing, or for a combination of capital and operations. Such funds mean the city could build and support permanent housing units for people experiencing homelessness.

“If we act boldly, we can be the first city in Washington state to take advantage of this new tool,” Durkan proclaimed.

The legislation Durkan proposes for bolstering MFTE program could help create 1,300 reduced-rent homes by 2022. If not renewed, that program — which incentivizes developers to set aside a portion of units in their buildings for lower-income households — will expire at year end. 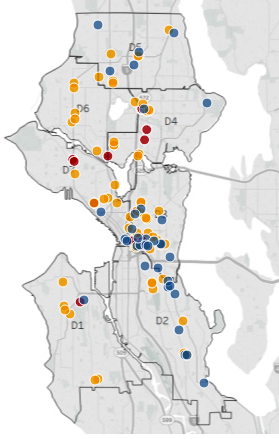 As part of the Housing Now initiatives, Seattle’s Office of Housing partnered with the Mayor’s Office Innovation & Performance Team to launch an innovative housing dashboard. It allows viewers to see the affordable housing projects coming online through 2022. The dashboard tracks the number of buildings, the total housing units, and the portion of affordable units, and can be filtered by anticipated completion dates. It also segregates activity by program, including city funded, multifamily property tax exemption and affordable units in market rate buildings.

As part of her presentation, Durkan recounted several housing-related accomplishments since she took office 20 months ago. Among achievements she highlighted were “aggressive investments to build more housing.”

The mayor credited “generous Seattle voters who were smart enough to pass the Seattle Housing Levy in 2017 and 2018, enabling the City to invest over $710 million with various partners to building more low- and middle-income housing.”

Durkan also lauded the implementation of better laws and policies for contributing to progress on creating more housing, notably:

And, she noted, “I signed an Executive Order to break down even more of the financial and permitting barriers to building these new homes.”

While much has been accomplished, the mayor emphasized “there is still so much to do. We have so much catching up to do. We have to surge our investments and try some new things,” she told the gathering of community members.