No need to turn out the lights.

Despite reports of an exodus from downtown Seattle due to a combination of factors, including the coronavirus pandemic, rising homelessness, and civil rights protests, a series of recent reports paints a fairly rosy picture:

In its 2021 mid-year Development Guide and update, the Downtown Seattle Association 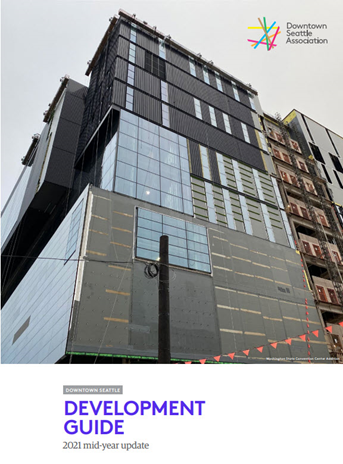 (DSA) indicated the 5,564 new residential units expected to be completed in 2022 could mark a record for a two-year period. The surge reverses activity in 2020 when developers completed the fewest project since 2011. The pandemic sidetracked several projects in 2020.

More than 98,000 people now call downtown Seattle home. That record-breaking total contributed to a 38% population increase over the past five years.

DSA also reported more than 28,000 new apartment units, 4,200 hotel rooms, and 17.5 million square feet of office space have been built since 2010. Disruptions from supply-chain issues, along with material and labor shortages could slow momentum, DSA said in a cautionary note.

Jon Scholes, president and CEO of the 1,700-member association, acknowledged significant challenges exist, but commented, “No city has gotten better by people leaving and abandoning or not showing up.”

More than 250 new businesses have opened, but twice that number have shuttered their doors since January 2020, according to information from DSA. An upbeat Scholes expects more than 100,000 people will soon live downtown, “one of the largest residential populations of any downtown across the U.S.” He cites significant investment in the development of both new apartments and condos as factors for the influx.

“With the opening of a new arena, waterfront park and more light rail lines on the horizon, residents and investors are demonstrating their confidence in downtown’s bright future.”

Esri estimated Seattle’s greater downtown population jumped 60% in the past decade, from 62,000 residents in 2010 to nearly 99,000 this year. In addition to the downtown Seattle neighborhoods, the coverage area encompasses First Hill and the part of Capitol Hill that runs from Broadway to the west.

The second source of DSA data was CoStar, the leading commercial real estate data provider in the U.S. Its information is derived from property manager reports for each building. According to CoStar, occupancy and rents reached record highs for the greater downtown Seattle area during the second quarter of 2021.

CoStar also tracks move-outs and move-ins. They reported a turnaround from 2020, when the number fleeing the city far outgained those moving into it. For the latest quarter, CoStar found there were 1,735 more move-ins than move-outs in downtown apartments (excluding condos).

Rents have also rebounded, while rent concessions have declined. Asking rents for second quarter 2021 in greater downtown was reportedly $2,221, edging out the previous high of $2,207 (from the first quarter of 2020).

While optimistic as tourism and hotel occupancy rise (“downtown’s unmatched amenities are powerful draws”), Scholes acknowledges the delta variant of the coronavirus is concerning. He expects a slow return of office workers, which will hamper activity for retailers and restaurants.

Yet another report documented Seattle’s attraction to the tech industry. An analysis by CBRE Group, the largest commercial real estate services company in the world, found the Seattle region added more than 48,000 tech jobs from 2016 to 2020. That 35.4% “brain gain” outpaced the rate of all other large U.S. tech markets. Only Toronto (at 42.8%) and Vancouver, B.C. (at 36.1%) surpassed Seattle, aided in part by restrictive immigration policies in the U.S.

Analysts and GeekWire’s co-founder Todd Bishop attribute the “meteoric rise” to several factors, including “the expansion of Silicon Valley engineering outposts in the Seattle area, the extraordinary growth of Amazon, the revival of Microsoft, and the emergence of heavily funded homegrown startups, particular in cloud computing.”

The “Scoring Tech Talent” report ranked Seattle No. 2 on its overall scorecard, moving ahead of Washington, D.C. and behind the San Francisco Bay Area. Its assessments were based on each region’s “depth, vitality and attractiveness to companies seeking tech talent and to tech workers seeking employment.”

Another part of CBRE’s report reviewed new tech-related college degrees in the context of overall tech jobs added in each region in order to determine whether a market could retain the talent produced by its universities. Seattle was runner-up to Toronto on the “brain gain” measure.

CBRE also compared tech talent wages and overall diversity. Seattle ranked 2nd (behind the San Francisco Bay Area) in terms of wages and but ranked in the middle when scored by employment of women and underrepresented racial and ethnic groups in the tech industry

CBRE said technology companies were some of the most resilient throughout COVID-19. Its annual tech talent report is “intended to serve as a resource for decision-making and success in building tech talent teams to fulfill critical business and innovation objectives in the years ahead.”