Sammamish singled out as a ‘Best Place to Live’ 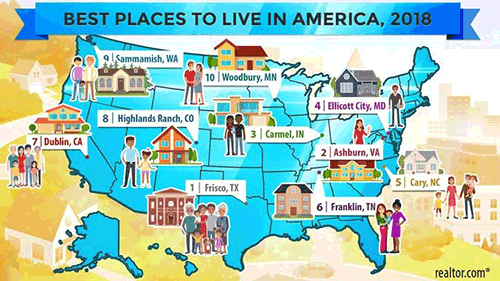 Sammamish was the only city in Washington state, and one of only three cities in the Northwest, to earn a spot on MONEY’s 50 Best Places to Live rankings. The city, with approximately 65,000 residents, was ranked No. 9. Frisco, Texas placed first.

For more than 30 years, MONEY has evaluated cities on various criteria. Unlike last year’s focus on small towns, the 2018 list compared places with populations of 50,000 or more.

This year, in partnership with realtor.com, MONEY considered more than 135,000 data points to “uncover spots that offer a winning mix of affordability, charm, and economic strength.”

Despite its high ranking, Sammamish drew some criticism about its “limited options for first-time buyers” and “atrocious commutes.” Infrastructure such as roads has not been improved at the same pace as the housing expansion, MONEY noted.

According to the city’s website, Sammamish is home to highly educated residents with 45 percent having a bachelor’s degree (versus 30 percent countywide) and 28 percent possessing a graduate or professional degree. About 23 percent of the workforce is classified as software or technology workers. More than half the households (55 percent) have children, and nearly three-quarters (73 percent) report a median household income of at least $100,000.

Sammamish, which incorporated in 1999, anticipates 3,800 new households and 2,000 more jobs by 2040. In mid-September, the City Council voted to renew a building moratorium for an additional six months, but added some key exceptions, in part so the council could address transportation concurrency and traffic impacts related to development and growth.

“The Best Places to Live” designation follows other awards bestowed upon Sammamish, including being named first on a Forbest/Nextdoor list of America’s Friendliest Towns in 2012, and 13th on NerdWallet’s 2016 list of “Best Small Cities for Families.”

No other city in the Pacific Northwest made the “top 10” list.  Hillsboro, Oregon was No. 39 and Boise, Idaho was No. 46 on the latest Best Places to Live list.