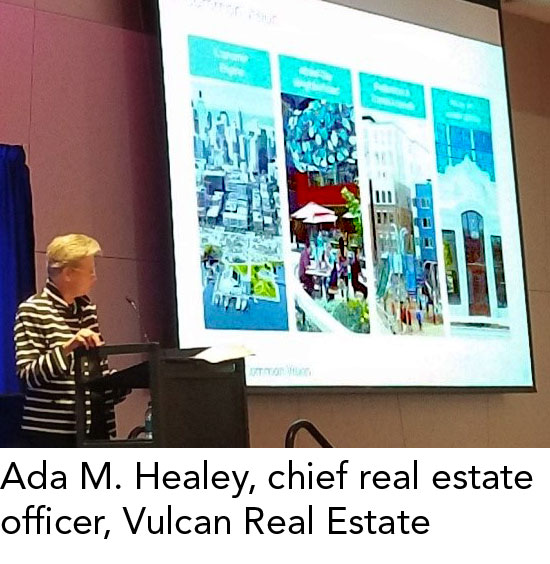 With a focus on “working together to build stronger communities,” SKCR president Rich Bergdahl welcomed guest speakers, incumbents and residents hoping to be elected to various city and county positions, plus Realtors to the 25th annual installment of the Briefing. He said the goal of the event is to arm candidates with some tools to address housing issues, calling it “probably the most pressing public policy issue of our time.”

Keynote speaker Ada M. Healey, chief real estate officer at Vulcan Real Estate opened her remarks by outlining three key concepts that provide the framework for that company’s development and redevelopment efforts as it addresses the twin challenges of supply and affordability:

“We can build walls for the elite, or we can work together,” she suggested while noting Vulcan chooses to embrace policies and incentives. “When we plan for managed growth, we can create great neighborhoods,” she stated.

Healey’s presentation included informative graphics on rising construction costs, permit approval times (now at an all-time high of 18-24 months), and forecasts for continued growth around Puget Sound (with the addition of an estimated 1.8 million people by 2050). Such factors increase development costs, which are passed on to consumers, forcing people of more modest incomes to live farther from city centers, thereby resulting in more traffic gridlock and greenhouse gasses.

Using South Lake Union as an example, Healey attributed the success of this “innovation district” to four key elements:

Additionally, there is a common four-pronged vision centered on the area being an economic engine, being a mixed use neighborhood, being pedestrian and transit-friendly, and being focused on sustainability.

Transforming the Yesler neighborhood has been a long-term project for Vulcan, which partnered with the Seattle Housing Authority and the city of Seattle to redevelop the 30 acres that once encompassed the city’s first publicly subsidized and racially integrated housing community. When built out, the neighborhood will house around 10,000 residents in approximately 5,000 housing units for mixed incomes.

Healey also discussed the MFTE (multi-family tax exemption) program, one of the primary tools Seattle has to provide affordable housing options, including a graphic showing the rising number of units expiring out of MFTE. “Notably, more than 7,000 MFTE units will roll off by 2029. A legislative bill that would have extended it failed to pass,” she remarked.

Vulcan believes the MFTE program should be renewable, applicable to existing products, and available in all neighborhoods.

To open the panel discussion, a video produced for Sightline Institute was shown to explain the concept of invisible walls and upzoning, or revamping zoning laws to allow a healthy mix of homes of all shapes and sizes, and for all incomes. 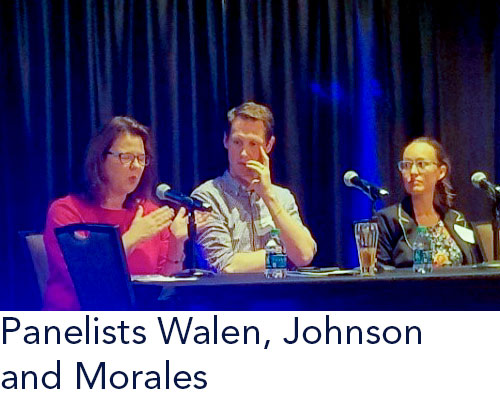 Former Seattle City Councilmember Rob Johnson, who is now VP of transportation for NHL Seattle, summarized Seattle’s growth since 2015, showing a progression of slides with overlays of new buildings. He also provided a snapshot of the Housing Affordability and Livability Agenda (HALA), a multi-pronged strategy for addressing housing affordability in Seattle.

As part of the 28-member stakeholder group, officially known as the Regional Affordable Housing Task Force, Johnson shared insights about their 65 recommendations, its bold vision, and actionable steps for creating 244,000 units of income restricted housing by 2040.

Recalling the first public hearing to present HALA’s recommendations before a crowd of 300 people, Johnson praised SKCR Housing Specialist Randy Bannecker for standing up and expressing support despite being met with boos.

Implementing zoning changes and other recommendations to build affordable housing doesn’t have to be scary, Johnson told the audience. It can be accomplished with smart planning and good intentionality.

We have a punch list, Johnson told the audience noting “HALA gave elected officials a roadmap.” Turning to the aspiring public officials in the audience, he said, “We’ve got the playbook, now it’s up to you guys to execute.”

Margaret Morales, senior research associate at Sightline Institute, gave a synopsis of that think tank’s focus on policy measures to boost housing diversity. She also shared “constructive housing messages,” some of which were top-level findings from focus groups. As examples, she recommended saying “choices” instead of zoning. For narratives around “greedy developers,” the message should be about the expenses of building, and developers should be referred to as homebuilders.

Morales stressed the importance of effective communications in part, she explained, because growth is a divisive issue and when one city makes a decision, the impacts of it may not stop at its own boundaries.

The third panelist, Amy Walen, is a former Kirkland City Council member who served as mayor in 2014. Sue currently serves as a State Representative in the 48th Legislative District and as CFO at Ford-Hyundai of Kirkland, a business she and her husband own. Among her accomplishments while serving in office in Kirkland were strategic economic development, including revitalizing the Totem Lake Business District and championing mandatory inclusion of affordable housing in residential developments.

Commenting on strategies for boosting the supply of housing, Walen said “every strip mall on the Eastside is an opportunity, and with transit, there are perfect places to build zero lot line housing. Housing is infrastructure, she emphasized, and it needs to be mandated for cities to take their share of growth. She also suggested churches with a lot of real estate could develop housing on surface lots.

“Without planning, we won’t have service workers living in the community,” and some of the aging population won’t be able to stay, Walen suggested.

In response to a question about how Realtors can better work with council members, Johnson said they need to be better at telling stories. “Realtors are on the ground collecting information. They need to appear during non-controversial moments and share their stories.”

Walen emphasized council members can’t know everything, saying they need to know Realtors, librarians, and others. “It is essential when we face angry people opposed to growth that Realtors and other “regular community members” who are stakeholders appear, and write an email or letters for the public record.”