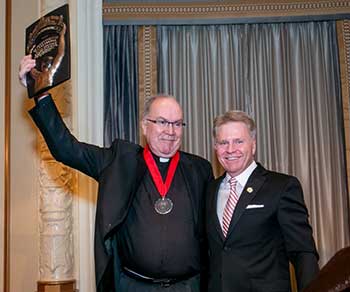 Fr. Stephen V. Sundborg, S.J., president of Seattle University, hoists the Seattle-King County First Citizen Award upon receiving it from Rich Bergdahl, 2019 president of Seattle King County REALTORS®. During the civic banquet marking the 81st year of the event, “Father Steve” said it was probably the most important recognition he has received during his 22 years as president. He is the third president from Seattle University to be honored since Realtors established the award in 1939 to recognize volunteerism, philanthropy and community service to enhance the area’s quality of life. “It means something very special to me because Fr. Lemieux in 1956 received it, and Fr. Sullivan in 1990 was named First Citizen. Fr. Lemieux was 48 years old; Fr. Sullivan was 59. I’m 75, so I think this just proves that the 70s are the new 50s,” he quipped.