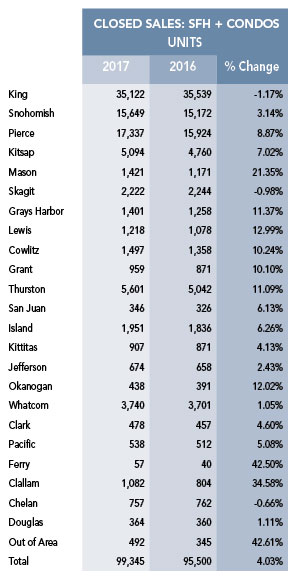 KIRKLAND, Washington. (Jan. 18, 2018) – Members of Northwest Multiple Listing Service reported 99,345 closed sales during 2017, outgaining the prior year’s volume of 95,500 transactions for an increase of more than 4 percent. Inventory dipped to record lows while prices continued to rise.

Measured by dollars, last year’s sales of single family homes and condominiums were valued at more than $46.5 billion. Compared to 2016, that dollar volume represents a gain of 6.2 percent.

The sales activity reflects the work of more than 28,000 brokers across 23 counties in the member-owned Northwest MLS.

The area-wide median price for last year’s sales of single family homes and condominiums (combined) was $370,000, a gain of 9.6 percent from the year-ago figure of $337,500.  A comparison by county shows median sales prices ranged from $133,000 in Ferry County to $562,000 in King County. All counties registered year-over-year price increases.

Inventory shortages persisted throughout 2017. Member-brokers logged 120,706 pending sales (mutually accepted offers) during 2017, while adding 114,297 new listings to inventory. As a result of the market imbalance, competitive bidding and multiple offers on homes in the most desirable areas were common.

Last year, the area-wide supply, as measured by months of inventory, averaged only 1.48 months, down from the previous year’s figure of 1.86 months. Among the counties in the MLS service area, King County had the lowest level, averaging only 0.88 months. In general, industry analysts use a 4-to-6 month range as an indicator of a balanced market, favoring neither buyers nor sellers.

The highest-priced single family home that sold during 2017 by a member of Northwest MLS was a property in Medina that commanded nearly $23.4 million. Topping the chart of high-priced condominiums was a penthouse unit in a downtown Seattle high-rise that sold for $7.5 million.

Among other highlights in its annual compilation of statistics, Northwest Multiple Listing Service reported: