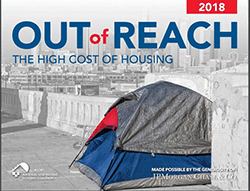 Washington has the 7th worst shortfall between average renter wage and two-bedroom housing wage, according to the 2018 Out of Reach report from the National Low Income Housing Coalition (NLIHC).

The new report compares Housing Wages in all 50 states, the District of Columbia, plus Puerto Rico and more than 3,000 counties nationwide. (Housing Wage is the estimated full-time hourly wage a household must earn to afford a decent rental home at HUD’s Fair Market Rent while spending no more than 30% of their income on housing costs.)

This year’s recorded hourly rate needed to live in a two-bedroom rental in the Seattle-Bellevue metro area was $36.12, a jump of nearly 22 percent from last year when it was $29.69. Based on the state’s minimum wage of $11.50, an individual would need to work around 93 hours a week (the equivalent of 2.3 full-time jobs) to afford that rental. For a one-bedroom rental, that worker would need to clock 75 hours.

Statewide, where there are more than a million renter households (about 38 percent of the total), a household must earn $26.87 per hour ($55,886 annually) in order to afford the Fair Market Rent of $1,397 for a two-bedroom rental home. That translates to a gap of $7.96, with only six other states having larger shortfalls. Hawaii’s gap is a whopping $19.98.

At $26.87, Washington’s Housing Wage is surpassed by Hawaii, California, New York, Maryland, Massachusetts and New Jersey. The Evergreen State’s Fair Market Rent (FMR) for a two-bedroom apartment is $1,397. In order to afford this level of rent and utilities — without paying more than 30% of income on housing — a household must earn $4,657 monthly or $55,886 annually.

In a preface to the 284-page report, U.S. Senator Bernie Sanders urged big thinking and bold actions to address the affordable housing crisis. “We must make a historic and sustained commitment to ensure every family has an affordable place to live and thrive,” he wrote.

The senator from Vermont recommended several actions, including:

NLIHC was established in 1974 by Cushing N. Dolbeare. Funding for the latest report was provided by J.P. Morgan Chase.