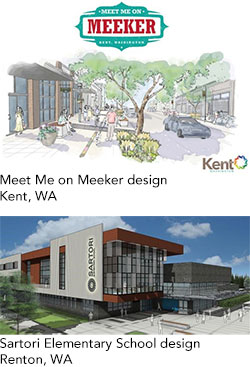 Two King County cities, Kent and Renton, were among winners of a 2018 Smart Communities Award. The program, now in its 13th year, recognizes achievements by local leaders who promote smart growth planning and projects that contribute to thriving communities, a prosperous economy, and sustainable infrastructure in the State of Washington.

Kent was honored with a Smart Choices Award for its Meet Me on Meeker Streetscape Design and Construction study. Centered on a promenade concept, the project will update the corridor, complement new development, and better connect residents and businesses.

The “Smart Choices” citation praised Kent for its “place-making effort” that directs investment to the urban core of Kent and encourages efficient multimodal transportation by connecting regionally significant trails and local destinations. The award also notes the Meet Me on Meeker endeavor directly implements the city’s comprehensive plan and creates a sense of “being somewhere.”

Renton was one of two recipients of a Smart Projects Award. It was singled out for its new downtown Sartori Elementary School, which judges said, “is a step in the right direction toward achieving the city’s vision so that the city center and downtown become ‘a cohesive, identifiable urban center where people live, work, learn, play and visit.'”

Located in a designated Regional Growth Center, the vertically-designed school with plenty of open space for recreational use will serve 650 students and meet projected growth over the next decade. The project is expected to be a new prototype for school campuses to support high-density development while eliminating the need for a larger project site.  Scheduled to open in the fall, Sartori Elementary will be the district’s first Option School.

“Outstanding local collaboration is key to creating sustainable communities with a shared vision for their future growth and prosperity,” declared Governor Jay Inslee. “These community projects demonstrate why Washington is such a special place to live, work, and play.”

In commending the 2018 winners, State Commerce Director Brian Bonlender said they showcase “some truly exciting efforts toward sustainable growth and resilience that will strengthen communities for the future.”