Five experienced attorneys, including one who served as moderator, and a sold-out crowd of 550 Realtors and affiliates gathered in Bellevue last month for the annual Battle of the Barristers presentation of Seattle King County REALTORS®.

Along with being approved for three clock hours, the event was a fundraiser for the Seattle First Citizen Scholarship Foundation.

Over the course of the program, Spence introduced six scenarios covering actual real estate disputes, but substituted fictional characters for the real participants. In a departure from past formats, he invited one of the barristers to do the initial analysis of the issue, then opened it up for debate by the other lawyers, followed by questions from the audience. 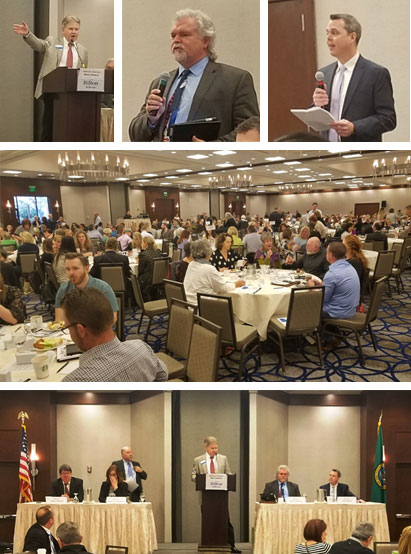 To start the program, Spence outlined a case he titled “The Buyer Who Couldn’t,” which involved a transaction that failed to close, resulting in disputes over forfeiture of earnest money and possible charges of fraud. The case raised questions about the roles and promises of both the seller’s and the buyer’s agents, a seller’s reliance on a broker for advice, buyers who may have misrepresented their income, and the need to properly monitor progress toward closing.

Fitzsimmons said the seller’s agent should have had a conversation with his client about instructions to be included in an offer, such as verification of funds for the purchase offer. “In today’s world there is no reason to take a property off the market until there is an underwriting pre-approval letter, including any conditions,” she emphasized.

Fitzsimmons believed the “buyer loses on every point,” but advised the audience that what the listing broker did in encouraging clients to take a financial risk by proceeding with plans to sign a franchising agreement “is not what you want to do.” Neste concurred, saying promises about quick closings could expose brokers to claims of breach of duty. The barristers agreed the brokers should have made better use of MLS forms pertaining to financing and checkboxes on remedies.

Scenario #2, “The Sweaty Buyer,” was centered on title issues and covenants, conditions and restrictions, and a demand letter from an attorney sent two years after the transaction closed.

The “Sweaty Buyer” case raised issues around “informational inspections,” waiving contingencies, and misrepresentation of material facts. It involved purchasers who had expressed plans to install a ductless heat pump at a “live-work” condominium, and a contingency for ADA parking. That contingency was later waived by the buyer, who had revealed a medical condition to the listing broker when inquiring about ADA parking and installation of a heat pump.

Tingvall said the doctrine of waiver could come into play, but because of the buyer’s decision to waive a previously stated contingency involving handicapped parking, the burden is on that buyer. “The buyer is deemed to have read and understood the Declarations. Nothing says the listing broker had a duty to verify,” he noted.

Osborn said such cases could go to trial over a question of “who is lying.” He suggested the broker assumed some responsibility by saying “he’d look into reallocating the building’s ADA parking space to the buyers,” and subsequently reported, via text, the outcome of a conversation with the HOA president which cast doubt on that possibility.

Neste said the listing broker’s inquiries about the buyer’s disability indicates clear knowledge of it. He also suggested this case raises questions about Fair Housing. “HOAs are governed by Fair Housing requirements and have a responsibility to allow a reasonable amount of accommodation, such as for the ductless heat pump.”  He also said brokers who suspect a Fair Housing violation have an affirmative duty to address or report it.

Fitzsimmons told the audience, “There is no possible good that could come to a seller from an ‘information only’ inspection. Spence also said communicating via text could be problematic. Osborn reminded the audience, “If a transaction exists, it should go into the file.” Fitzsimmons reiterated that point, saying, “What is important is the groundwork in the file.”

“T-Clyde Returns” was the theme of the third scenario, which was centered on the listing broker’s agreement to settle the demand letter in the previous case for $10,000, based in part on advice from a relative who was a recent law school graduate. The following year, the listing agent received a letter from the Seattle Office of Civil Rights and Compliance accusing the agent of a Fair Housing violation. Acting again on advice from the novice attorney, the agent forwarded a copy of the settlement agreement to the Office of Civil Rights.

The barristers debated the concept of settling, the fact that the Office of Civil Rights is not the same as the Department of Licensing, and the failure to include a broad release with a specific promise not to file other complaints.

Neste emphasized, “If you violate licensing, you won’t be able to settle your way out of it.” Osborn also warned the audience about private agreements, saying they could be counterproductive, and could signal some merit to a claim. Tingvall suggested DOL might back off if there is a settlement.

“Orcas and Landslides” were the themes for the fourth scenario. It involved a listing on a steep cliff and a disclosure on Form 17 from a previous listing wherein the seller answered no to questions about surveys or notices that would adversely affect the property, or material damage from earth movements or landslides. The scenario raised questions about seller disclosure and buyer’s duty to investigate “when there are obvious but undisclosed latent defects.”

When the current broker inquired about the disclosures he was advised by the seller that the previous broker, who had been made aware of a large landslide on the adjacent property, had told the seller the correct answer to the questions was “no” since that damage had been repaired and it affected the next door property.

The house sold quickly, but two years later it was destroyed in a landslide. Six months thereafter, the seller contacted the broker saying he was being sued for fraudulent misrepresentation, negligent misrepresentation, breach of contract, and violations of the Seller Disclosure Statute (RCW 64.06). The seller was faulting his most recent broker for failure to advise him to amend the prior Form 17 or disclose to the buyers a geotech survey that had been done after the neighbor’s landslide that identified landslide concerns on the seller’s property.

Neste said both the listing and buyer brokers should have inquired about the slope stability based on what was obvious when viewing the property. Both he and Osborn reminded Realtors of their duty to correct known errors, omissions or inaccuracies, and a duty to exercise reasonable care, even though they may not have a duty to investigate or verify. “An affirmative representation is worse than a nondisclosure,” Neste commented.

The fifth scenario pertained to the capacity to contract and convey real property when representing a seller who does not have a clear title because of a divorce.

The dispute involved a couple involved in an ugly divorce from which the husband was awarded the house. Upon pulling a title report, the listing agent learned the title was vested in the names of the husband and wife. The buyer’s agent failed to notice that but saw the divorce decree and relied on that information. The title reps refused to clear title without a quitclaim deed.

Even though the seller’s agent had negotiated a temporary rental agreement with a buyer and arranged an extended closing date, no transaction could be finalized.

“It’s a dead deal,” declared Osborn since the seller is unable to deliver titled insured. Neste agreed, saying, “There is no deal as there is no marketable, insurable title.”

The final scenario, “I Want My Oil,” involved a transaction in which a buyer sought to terminate an agreement based on a newspaper report suggesting the housing market was crashing. When the buyer submitted a Form 90C, the seller rejected it.

Then, four days before closing the oil furnace breaks down but instead of getting it fixed due to unavailability of parts, the broker and seller fail to disclose the newly-discovered defect, instead replacing the oil furnace with a gas one. Upon discovering the switch, the buyer submits another Form 90A (Notice of Rescission of Agreement Pursuant to RCW 64.06), which the seller refuses to sign. At the next day’s closing, the buyer refuses to sign the documents and the deal fails to close.

Fitzsimmons said an unanswered question was whether the seller maintained the property in the same condition, given the hole to remove the oil tank.

Osborn said the wrong forms may have been used, suggesting Form 90A and Form 51 (Rescission Agreement) may have been preferable. He also noted there is no disclosure requirement on Form 17 on whether a furnace is gas or oil.

Neste also wondered if the oil tank was leaking and whether there was contamination. “Given the modification to the property, there should have been disclosure.” The listing broker has a responsibility to review forms to make sure they are completed, including checkboxes.

With this year’s proceeds, the Battle of the Barristers events have raised nearly $380,000 in scholarship funds since 1999. SKCR president Rich Bergdahl also announced the creation of the Peter Freet Memorial Scholarship, named in memory of the longtime broker and volunteer leader who passed away late last year. The new scholarship will be awarded to this year’s highest ranked applicant.