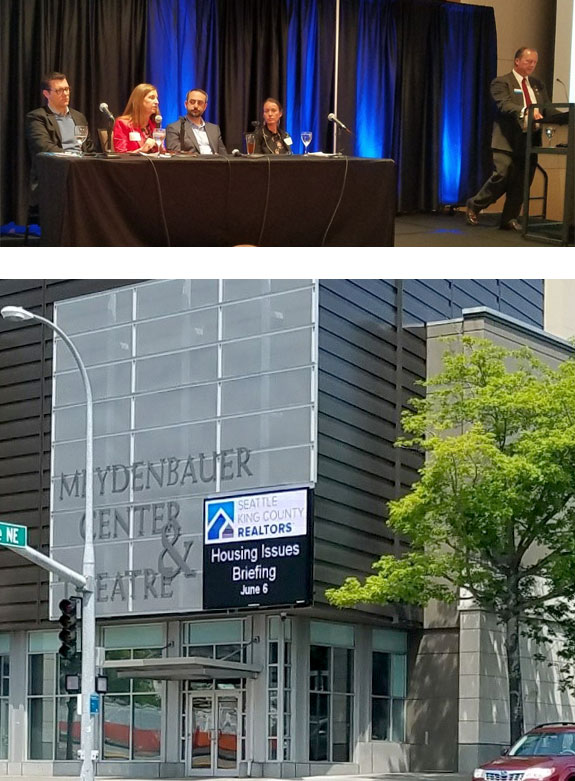 Now in its 24th year, this year’s annual Housing Issues Briefing (HIB) focused on what Davies described was “an enormous housing supply and affordability crisis that has become an undeniable emergency.” The “law of supply and demand” cannot be repealed, Davies stated, adding, “It is at the core of the crisis.”

Joining him to tackle that topic were:

Davies, the owner of Windermere Real Estate/Maple Valley, opened the discussion with some “state of the market” statistics, emphasizing fixing the housing shortage is the biggest challenge elected officials will face. “Here in King County, and in much of the state, it feels like a whole generation of families are not only losing hope, but also losing access to the American Dream – faster than you can pass a head tax,” he told the audience.

Davies also outlined some of the consequences of “driving to qualify,” saying “worst of all, longer commutes erode our quality of life by robbing us of time with family and community.”

Turning to Sen. Palumbo, the moderator asked him about Senate Bill 6077, including its primary objective and whether he, as prime sponsor, planned to reintroduce it or other housing proposals next session. (SB 6077 would have set minimum density standards for comprehensive plans adopted by cities under GMA.)

Sen. Palumbo confirmed he intends to reintroduce that bill after “tweaking” it, confessing he did not anticipate the level of NIMBYism that occurred. Now, he believes, “we’re at a unique point in time with people on the left and right saying the same thing” about the severity of the housing crisis. Housing will be a big issue in the long session, he commented.

Palumbo also commented on the apparent disconnect between growth and infrastructure. In Seattle, he noted, two-thirds of the land mass is zoned single family. Off Highway 99, for example, there is single family zoning next to transit. “That makes no sense,” he remarked.

Panelist Margaret Morales was asked to explain the importance of condominiums, comparing the approach in Vancouver, BC with what she has observed in the Central Puget Sound region.

As a preface to her reply, Morales polled the audience, asking how many lived in a condo (very few), then asked how many might live in a condo in the future (significantly more raised their hands).

This region has a “shockingly low” supply of condos compared to Vancouver, stated Morales as she showed a series of slides to illustrate her point. “Condos consistently account for over half of Vancouver’s housing starts,” she emphasized.

Condos offer several benefits, according to Morales, including:

Morales also referenced an ambitious zoning bill proposed earlier this year in California (SB 827), which would have required cities in that state to permit midrise apartment construction around high-frequency transit stops.

In an editorial about the failure of the bill to clear its first committee hearing, the LA Times suggested it “immediately became a lightning rod because it so dramatically upended local control over housing and development decisions.”

As an advocate for updating the state’s Condo Act, Morales suggested how we plan is at the nexus of policy, economics and social sustainability. California’s experience with SB 827 could be a model for discussion on housing policy at the state level.

Another piece of legislation was the basis of questions for panelist Senn, who was prime sponsor of HB 2831, which offered some condominium liability reform. Although that proposal, based on existing Colorado law, had strong bi-partisan support from members of the House Judiciary Committee, it failed to receive a floor vote in the house.

Rep. Senn said the bill she proposed last session is not a partisan issue – it’s to address stability of families and make sure our region is affordable to all. Mentioning personal anecdotes on challenges people she knows have encountered, Senn stressed the need to create a cycle of housing. “We need to build affordable, work force housing, housing for people who want to downsize, and housing that provides stability for families.”

Senn also advocates for the “right to cure.” If there is a problem with construction, the builder should fix it, she explained. She also believes builders need access to insurance that isn’t as onerous and expensive as what is currently available.

Davies then asked the fourth panelist, Sen. Fain, to discuss the possibility of new GMA mandates, offering up a list of 11 possibilities.

Fain described SB 5254, of which he was the original prime sponsor, a “great success,” even though it may have been esoteric for those not familiar with buildable lands. “Buildable lands inventory is supposed to inform developers and others, but in reality they may not be buildable at all. For many communities, it’s been a useless document,” he remarked.

Fain was also critical of some transit solutions, saying they aren’t workable for many, citing the lack of parking at light rail stations. “On the infrastructure front, many meandering technologies have been developed,” adding, “We need to invest in solutions people want.” Among examples he listed were fast technologies, dedicated throughways, and construction of park & ride facilities.

Now, Fain said, stakeholder groups are evaluating the measure to not only identify buildable lands, but to also address impediments, such as services needed and concurrency.

Following remarks by panelists in response to the moderator’s questions, audience members were invited to asked questions.