From holes to homes: transformation underway 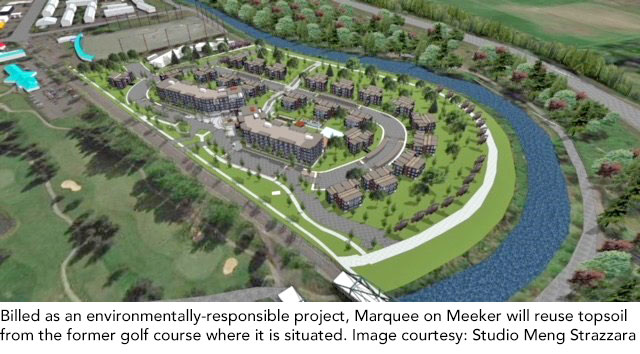 When completed, the development will encompass nearly 500 apartments in 21 three-story residential buildings, plus two six-story mixed use buildings, to be constructed in two phases. The first phase, slated for completion in 2020, will add 288 housing units “suitable for tenants of all ages” to the city’s stock.

Street improvements valued at $2 million are anticipated. City officials say it will serve as a new western gateway to the city.

In a news release, Landmark Development group of Auburn and Seattle-based HAL Real Estate said mature trees will be preserved within a 200-foot natural buffer between the buildings and Green River. Describing it as an environmentally-responsible project, the building partners said they will re-use the former golf course’s topsoil, which has been collected and stored. Pedestrian and bike access through the site to the Green River Trail is also planned.

“This unique community will offer future residents the best of all worlds with its urban design and suburban feel while providing unparalleled livability and convenience. The serenity of being surrounded by large open spaces, including the Riverbend Golf Course and the Green River – which offer sweeping views and access to the Green River Trail – are unlike any apartments the region currently has to offer,” said Landmark Development Group’s President, Brett Jacobsen.

Kent’s City Council voted last May to sell the property for $10.5 million to Auburn-based FNW, Inc./Landmark Development Group. Proceeds will be used in part to help eliminate the city’s enterprise golf fund debt of nearly $4 million and allow for around $6 million in capital improvements to remaining parts of the Riverbend Golf Complex, which includes an 18-hole course across the street from the new housing development, a driving range, and a pro shop.

“Marquee on Meeker is an important project for the city and a tremendous leap forward in remaking Kent’s historic main street into a living, working destination for Kent residents,” said Kurt Hanson, Director, Kent Economic and Community Development Department. “This multi-phase project brings high-quality housing to our downtown and we see it as a springboard for continued reinvestment along the corridor that will better connect residents and businesses to our historic downtown.”