“Forest to Home,” an initiative of Forterra, got underway last month when construction started on the first homes being built with an engineered wood product known as cross-laminated timber (CLT). The milestone is part of Forterra’s goal to create “local, affordable housing built by local labor with resources from local forestlands.”

Forterra currently has Forest to Home projects in progress in Tacoma (in Pierce County), Tukwila (in King County) and Hamilton (in Skagit County). When completed in the next few years they will add 500 affordable units built with responsibly harvested local timber.

The modules being built at an industrial building at the Port of Everett are being assembled by a four-man team from Switzerland. When completed the prototypes will be toured around the region on a flatbed truck to show off the possibilities.

Eventually, construction of the CLT panels will move to the Darrington Wood Innovation Center  (DWIC), a mass-timber production facility that is under construction at a 94-acre site. The project, estimated to cost around $73 million in total, is being developed and managed by Forterra in collaboration with Darrington and Snohomish County. An early 2023 completion date is anticipated.

In addition to the CLT plant, DWIC will encompass a small European-grade remanufacturing sawmill and kiln facility, and a modular fabrication facility

Along with bringing approximately 150 family-wage jobs to Darrington, a small town in Skagit County that has been involved in the timber and wood industry for nearly a century, the center will produce enough cross-laminated timber to build a thousand affordable housing units per year. It will also serve as a hub for innovative wood product manufacturing.

The multi-million dollar facility is being funded by a variety of sources, including the Additional Supplemental Appropriations for Disaster Relief Act of 2019.  Earlier this year, the U.S. Department of Commerce’s Economic Development Administration awarded a $6 million grant to Darrington to acquire land and provide infrastructure to establish the Darrington Wood Innovation Center.  Also this year, the Washington State Department of Natural Resources transferred 3.74 acres of land to Darrington for the center. 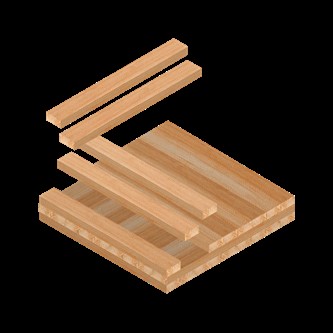 Cross-laminated timber is the structural basis for the Forest to Home concept. The eco-friendly sustainable material consists of layered lumber boards stacked crosswise at 90-degree angles and glued into place. Board thickness typically varies between 5/8 to 2 inches with widths ranging from 2.4 to 9.5 inches. Finished panels are typically two to 10 feet wide, with lengths up to 60 feet and thickness up to 20 inches. The panels can be manufactured at custom dimensions as transportation restrictions allow.

CLT (sometimes called XLam) is widely adopted in Europe and gaining popularity in the U.S. Its alternating grains contribute to CLT’s strength, dimensional stability, and rigidity, allowing its use in a variety of commercial and residential applications, including mid- and high-rise buildings, prefabricated floor slabs, single-level walls, and taller heights.

Architects tout CLT’s aesthetic qualities since the wood surface can be showcased without needing paint. Additionally, it can be used in hybrid applications with other materials and as a prefabricated building component. Another advantage are smaller, quieter work sites.

Panels cost about the same as steel and concrete but are lighter and quicker to assemble on site. Tests show its fire resistance is comparable to steel and concrete. Advocates note a seven-story CLT building in Kobe, Japan withstood a 1995 earthquake with no sign of damage. Energy efficiency is another value-added property of CLT.

Tobias Levey, Forterra’s vice president of transactions, said CLT creates a more “biophilic” living environment. (Biophilia, which literally translates to “love of life,”  was coined by a Harvard naturalist to “describe the innate tendency of humans to be drawn to nature and natural products like wood.) In an interview with a reporter from Puget Sound Business Journal, Levey referenced studies in Scandinavia that show living around wood had various health benefits than living the “drywall coated steel” does have.

With regard to cost, Levey said affordable housing developers are paying contractors from $400,000 to $800,000 a unit, whereas two-bedroom ModPro units can be built for $120,000, excluding the costs of land, entitlements and other soft costs, which could bring the total to around $300,000.

The global cross laminated timber market is expected to grow from $724 million in 2020 to $1442.62 million by 2028, according to a report by Fior Markets, a futuristic market intelligence company.

Describing itself as “an unconventional land trust,” Forterra “conserves and stewards land, develops innovative programs and policies, and supports sustainable development for towns, cities, and rural communities.”  It believes the interconnectedness of the natural, built, and social world is key to unlocking solutions to a resilient region. Additionally, it believes the health of smaller communities is vital to the sustainability of the Pacific Northwest.

When formed 30 years ago, it was known as the Land Conservancy of Seattle and King County and focused on developmental sprawl and threats to the county’s open spaces. Over time, it widened its reach and view of conservation, reflected in part by its name change to Forterra in 2011.

Since its inception, the organization has helped conserve and steward 250,000-plus acres in more than 100 counties, cities, and towns statewide.

Forterra’s leaders believe the impacts of its Forest to Home concept “ultimately could be felt across the country.”