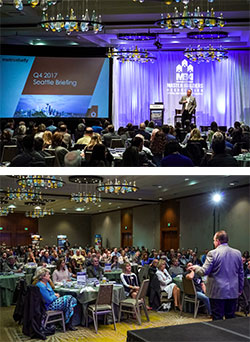 On Wednesday, January 31, the Master Builders Association of King and Snohomish Counties (MBAKS) kicked off its first general membership meeting of the year-an economic forecast breakfast presented by the association’s Sales & Marketing Council.

Becraft, a Certified 401(k) Professional®, touched on highlights of Morgan Stanley’s investment outlook for 2018. In short, the report states that global economic expansion delivered strong returns last year, but we should not expect the same in 2018. Morgan Stanley is not anticipating a recession this year but rather that markets will begin to normalize.

The forecast already factors in recent tax cuts, Becraft said. A look back at the U.S. stock market over the last 37 years shows that tax cuts are not correlated to market performance. In the year after President Ronald Reagan’s tax cuts took effect in the 1980s, for example, the market dropped.

Becraft offered additional observations, including ways in which demographics influence a country’s economy, and predictions on interest rates (he expects they will stay low and may even be cut).

The biggest risk to our economy going forward, he noted, is our national debt, which stands at $20 trillion. However, China’s national debt is significantly higher. Whereas the United States’ debt-to-GDP ratio is around 100 percent, the ratio in China is closer to 460 percent. Becraft said that some are speculating this could lead to a move by China within 36 months to repatriate capital that has flowed out of their country in recent years. If this were to happen, it could result in investments being pulled out of real estate in the United States, including the Seattle market, and transferred back to China.

Britsch focused on economic and housing data in the Puget Sound region and provided compelling information in his presentation as well, particularly related to the lack of future housing inventories.

Britsch’s presentation highlighted the fact that population and job growth continue to be very strong in the Puget Sound region, with 137,000 jobs added since 2015 and continued low unemployment in King and Snohomish counties. Furthermore, data from the Department of Licensing show that net driver in-migration into the region has averaged more than 6,300 per month since 2012, for a total of 460,000 new drivers from outside the area.

Britsch also stressed that housing supply is not keeping up with demand. Looking at the driver license data, he estimates this growth has created a demand for 100,000 owner-occupied homes between 2012 and 2017. However, during this time we have built and sold roughly 60,000 homes, creating a housing supply shortfall and causing upward pressure on home prices. The average list price for new construction within formal subdivisions, Britsch stated, has risen 20 percent in Snohomish County and 24 percent in King County year over year.

Britsch warned we are running out of land at a very rapid pace. With 10 months’ supply of vacant developed lots in Snohomish County, he said we’re at “crisis level” in terms of lot inventory.  The North Creek market area, which has been very robust in recent years, has dried up, Britsch said.

Since 2009, the entire Puget Sound region has had a net loss of 3,018 lots coming out of the system, not to be replaced. More importantly, in that same time frame, the available finished lot inventory has declined by 17,879. Britsch also pointed to Northwest Multiple Listing Service data, which shows King and Snohomish counties have just over a two-week supply of homes for sale.

Although the current housing market is showing signs of weakening, Britsch believes it will remain strong. The housing market is all part of a cycle, and we can expect an adjustment in sales, he said.  Britsch predicts that core areas from King County to South Snohomish County will continue to see double-digit appreciation due to lack of inventory.

Founded in 1909, the Master Builders Association of King and Snohomish Counties (MBAKS) has grown to become the largest residential home builders association in the United States. With 2,900 member companies, the association is dedicated to membership value, housing advocacy, community service, and financial stewardship throughout the Puget Sound region.