Housing the region’s growing population is a priority for planners, but compiling reliable data has stymied some well-intentioned efforts, one data analyst told Realtors.

Puget Sound grew by 68,000 people in 2017, earning it 9th place among the country’s fastest growing areas. The four-county region is projected to add 1.8 million more people (830,000 households) by 2050, bringing the total to 5.8 million people. Another 1.2 million jobs will be added during the same timeframe.

Those statistics were part of a snapshot of the area’s growth shared by Craig Helmann, director of data at Puget Sound Regional Council (PSRC) when he met with members of SKCR’s Governmental and Public Affairs Committee. 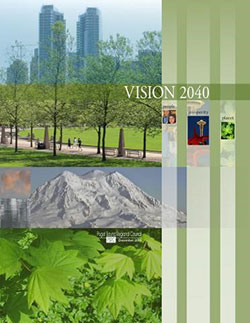 PSRC is in the midst of extending the region’s growth strategy another decade, from VISION 2040 to VISION 2050. Central to its mission is keeping the central Puget Sound region healthy and vibrant as it grows.

Vision 2040 set the stage for local GMA plan updates, Helmann explained. Work on VISION 2050 is underway, with the next round of local updates set for 2023.

Helmann provided an overview of who will be living here, highlighting three segments:

Notably, a separate chapter on housing was added to VISION 2040, which “places a major emphasis on the location of housing and promotes fair and equal access to housing.” (Editor’s note: PSRC published a 56-page “Housing Background Paper” in June 2018, which addresses trends, demand, affordability, policies and strategies.)

Helmann said the region is challenged to provide affordable housing with convenient access to jobs, schools and recreation. Whereas Vision 2040 was about preserving space, the 2050 plan is intended to consider new information and perspectives in preparing  a guide for sustaining the combination of a healthy environment, thriving communities, and a strong economy.

“PSRC hears a lot about housing availability, the rapid rise in prices, and the ‘missing middle,'” Helmann told the Realtors. Compiling data is difficult due to differences in assessor records in each county.

As part of his presentation, Helmann discussed performance overall for the region’s population and employment in various categories.

Limiting sprawl remains a priority. Currently in the region, 96 percent of permitted housing units are in cities and urban areas, up from 72 percent in 1991.

Helmann also compared Seattle’s population growth from 1960-2018 with the region’s. He noted Seattle’s population recently surpassed the 700,000 mark in the wake of ever-changing suburbs. Malls and strip malls are being transformed or replaced by dense transit-oriented housing development, Helmann stated, highlighting examples in Bellevue’s Spring District, and Tukwila’s Washington Place.

A regional transportation plan was adopted in May 2018. It provides a new financial strategy to deliver investments. Jurisdictions compete for $260 million annually in Federal Transit Administration (FTA) funding.

Commenting on transportation, Helmann said the region’s transit ridership growth is faster than any other large metro area in the nation.  He attributes the growth to major investments across multiple transit agencies.

Adoption of Vision 2050 is scheduled for spring 2020, following completion of a Scoping Report and SEPA review.

PSRC is a federally designated Metropolitan Planning Organization whose members are charged with making decisions about transportation, growth management and economic development.  Its membership comprises more than 80 entities within King, Pierce, Snohomish and Kitsap counties, including cities, towns, ports, state and local transportation agencies and tribal governments within the 6,400 square mile region.