When Tomio Moriguchi retired as chairman and CEO of Uwajimaya at the end of 2017, Jim Wajone, who succeeded him as chairman of the family-owned specialty supermarket, praised him for his strategic leadership and vision. Outside that business, Moriguchi is revered for his volunteerism, generosity, advocacy, and dedication. 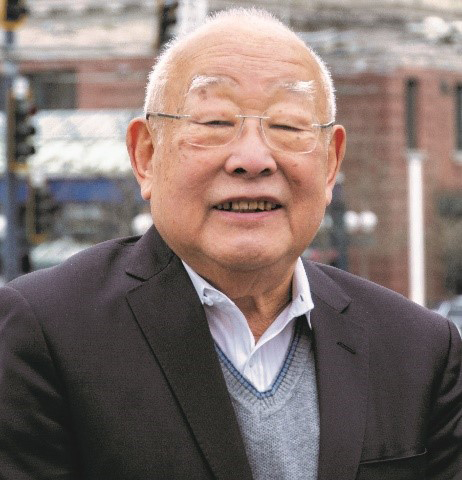 Those are among the traits the selection committee for this year’s Seattle-King County First Citizen Award cited in naming Tomio Moriguchi and Family as the 82nd honoree. The award will be presented at a civic celebration at a date to be determined.

In announcing this year’s recipient, event chair Trish Englund said Moriguchi’s remarkable contributions and benevolence have enriched communities not only locally, but also internationally. “He exemplifies all the qualities of a ‘First Citizen’ in the countless ways he has benefited the greater good,” said Englund, a broker at Windermere Real Estate Midtown in Seattle.

Selfless community service by the Moriguchis dates to the company’s founder (Tomio’s father, Fujimatsu) and continues today with the third generation that includes Tomio’s daughter, Denise, who became the company’s CEO in early 2017.

Whether being praised as a savvy businessman or a passionate philanthropist, 84-year-old Moriguchi is quick to credit his family. “You can’t do this without their support,” he commented after receiving the 1992 Japanese American of the Biennium Award, the highest public service award given by the Japanese American Citizens League. (Renowned figure skater Kristi Yamaguchi received the same award that year.)

In 1994, Tomio Moriguchi was the subject of a resolution passed by the Washington State House of Representatives. It recognized him for myriad contributions ranging from “caring for the elderly” to being “an exemplary role model for Asian American and Pacific Islander youth.”

In 2005, this year’s First Citizen was recognized by the Japanese government with the awarding of the “Kunsho” medal (Order of the Sacred Treasure). Considered the most widely conferred Japanese order, it recognized his distinguished achievements in bettering cultural relations between the United States and Japan.

This year’s First Citizen award recognizes the collective contributions of the Moriguchis in enhancing the quality of life throughout the area. In becoming this year’s honorees, they are only the fifth family to receive the prestigious award, joining Mary Gates & Family (1995 recipients), the Bullitt Family (2000), the McCaw Family (2004), and the Pigott Family (2018).

“As a past recipient of this prestigious award, I cannot think of a more worthy 2020 awardee than Tomio,” stated Phyllis Campbell, Pacific Northwest chairman of JPMorgan Chase & Co. “He and his family were early pioneers in the specialty grocery business, catering to Asian and Asian American tastes. However, he is mainly deserving because of his lifetime of generosity, giving back to our community in countless ways to make it a better place.  He is truly one of the icons in business and is a role model for up-and-coming diverse leaders, as his inspirational acts transcend generations.”

“Tomio is such an integral part of our local Japanese and Japanese-American community, and his tireless community involvement, whether in his longtime role as chairman and CEO at Uwajimaya, or his roles with local community newspaper North American Post, or the Japanese American Citizens League,” said Karin Zaugg Black, chair of the Japan-America Society of the State of Washington.

Moriguchi led the board at Uwajimaya for nearly five decades, but he traces his start in the business to his childhood in Tacoma. He recalls sleeping on bags of rice in the back of his dad’s truck as rounds were made to sell fish cakes to Japanese immigrant laborers in railroad, seafood, farming, and lumber camps.

That business, which was named Uwajimaya (“The Store of Uwajima”) after the fishing village where the elder Moriguchi learned his trade, was interrupted by World War II. Like other Japanese families, the Moriguchis, consisting of Tomio’s parents and his three siblings, were sent to Tule Lake Internment Camp in California. During the three sweltering summers and two harsh winters they spent there, the family grew with the birth of three more children.

After the war, in 1945, the family returned to the Northwest, settling in Seattle where Fujimatsu Moriguchi (Tomio’s father) borrowed money from friends and former customers to purchase a 1,200-square-foot storefront in Japantown (as it was then known) near the King Street Station. Several family members worked there while also helping other Japanese Americans return from internment camps by offering meals, work and advice.

The store expanded as the Moriguchis acquired adjacent storefronts and it gained notoriety when it “scored a slot at the 1962 World’s Fair at the Seattle Center.” That same year, Fujimatsu Moriguchi died, leaving the business to his four sons, who then extended ownership to their mother and three sisters.

When Uwajimaya incorporated in 1964, Tomio was selected to be the leader. Before joining the family business in 1962, the 1961 University of Washington graduate in mechanical engineering had been working at Boeing where he envisioned becoming a chief engineer instead of going into the family business.

Under Tomio Moriguchi’s leadership, Uwajimaya grew, both in terms of square footage at its flagship store, and by adding locations and employees. It currently has about 500 employees and four retail locations, plus a wholesale food operation.

With an unwavering commitment to using modern technology and cultural sustainability, plus an adherence to its business philosophy, Uwajimaya evolved from a provider of grocery staples,  kitchen utensils and gifts to its stature as a tourist and destination supermarket with an unmatched selection of authentic Asian food and high-quality merchandise.

As the company grew, Tomio Moriguchi deepened his commitment to community service and “giving back.” His numerous leadership roles have encompassed service on several corporate and nonprofit boards.

In 1975, Moriguchi co-founded and served as president of Issei Concerns, which became Nikkei Concerns, a nonprofit organization dedicated to the health and welfare of the elderly Japanese American Community in the Pacific Northwest.

In 1984, then-Governor John Spellman appointed Moriguchi as an initial member of the Washington State Advisory Council on International Trade Development.

Other key positions Moriguchi has held include:

1994    Appointment to the board of directors for the Seattle Branch of the Federal Reserve Bank of San Francisco.

2011    Board president and treasurer of Hokubei Hochi Foundation whose mission is to promote and preserve the culture of the Nikkei and Japanese community through educational and cultural projects and activities in the Pacific Northwest.

“I have to smile when I think of Tomio, and I revel in the times he came to a Kobe sister city potluck with sushi, or had fun reflecting on his Garfield High School days, and the warm smile he has for everyone. Tomio is definitely a community treasure,” exclaimed Zaugg Black.

Moriguchi’s devotion to his Japanese American heritage is well documented.

In the mid-1970s, he was part of a group known as the “Keiro Magnificent Seven” that committed “time, dollars, blood, sweat and tears” to acquire property and repurpose a building that was initially named Nikkei Concerns (renamed Keiro Northwest in 2016), a nonprofit facility dedicated to the welfare of the local elderly Japanese American community.

At the other end of the age spectrum, Moriguchi visited Ehime University in Japan (where his father was born) to discuss student internship programs in the United States.

The Moriguchi family received the Tomodachi Award in 2017 for their dedication to positive relations between the U.S. and Japan and for demonstrating a love for Japanese culture and heritage.

Since retiring from the board of Uwajimaya at the end of 2016, Moriguchi has remained active with various organizations and causes. Additionally, he still works on developing the company’s real estate holdings. One of his more recent transactions was the sale of a quarter-block parcel where his family’s original store in Seattle first stood. That site is being developed as KODA, Condominiums, a 17-story “vertical village” with 200-plus condominiums, a rooftop terrace and club room, a wellness center, Zen garden, meeting rooms, co-working lounge, controlled-access underground parking, and street-level retail.

“We’re thrilled to see this development and the range of affordability it provides in a culturally-rich neighborhood,” said SKCR President Georgia Stevens, a broker at Compass Washington. In addition to adding to our housing supply and attracting a diverse array of buyers, Stevens said the project is a great example of the outcomes Realtors seek through its global initiatives. “Since 2009 our Global Council has worked to strengthen relationships with organized Japanese real estate through education and exchange programs,” she noted, adding, “SKCR also serves as the NAR’s Global Alliances Ambassador Association to Japan, whose purpose is to establish business partnerships and referral opportunities.”

Reflecting on his heritage and accomplishments, Moriguchi references his Asian Confucius back-ground and the desire to be harmonious. “The challenge in both my business and nonprofit work was, and is still today, to harmoniously accomplish goals while not being confrontational,” he stated.

About the First Citizen Award

The Seattle-King County First Citizen Award salutes “giving back” whether by “time, treasure or talent” and civic engagement that enhances the region’s quality of life. Past recipients hail from both the public and private sectors, ranging from humanitarian groups, corporations, charitable, health and educational institutions, to various arts, environmental, and civic organizations. (see complete list on last page).

Since its inception in 1939, the First Citizen Award, believed to be this region’s oldest such recognition, continues to celebrate community leadership, volunteerism, and public service.

The civic banquet to honor the annual recipients is a not-for-profit celebration of civic engagement presented by Seattle King County Realtors® and partners from the real estate community. This year’s partners for the forthcoming event are John L. Scott Real Estate and Windermere Real Estate.

About the Seattle King County REALTORS®

The Seattle King County Realtors® is a nonprofit professional trade association whose goals include promoting ethical business practices and supporting policies that preserve and expand real property rights and housing affordability. Based in Bellevue, SKCR has more than 7,000 members and is a local board of the National Association of Realtors®. The term Realtor® is a registered collective membership mark that identifies a real estate professional who is a member of the National Association of Realtors® and subscribes to its strict Code of Ethics.