In no state, metropolitan area, or county can a full-time minimum-wage worker afford a modest two-bedroom rental home. Even a modest one-bedroom apartment is beyond the means of these workers in 93% of U.S. counties, according to Out of Reach 2021: The High Cost of Housing report. 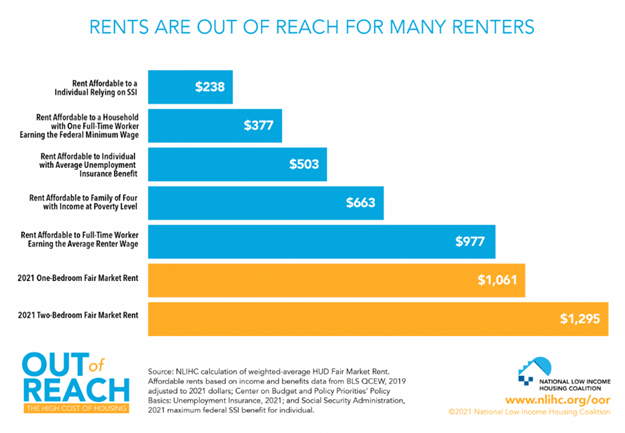 Researchers ranked Washington as the seventh most expensive state based on a comparison of “housing wages” for a two-bedroom fair market rental (FMR). Workers in the Evergreen State need to earn $29.31 per hour for such a home. California topped the list with its $39.03 housing wage. Arkansas was found to be the least expensive; workers there need a housing wage of $14.60.

The comprehensive 291-page report from the National Low Income Housing Coalition (NLIHC) compares the wages people earn and the price of decent rental housing in every state, metropolitan area, and county in the United States. Researchers calculate the “housing wage” as the estimated full-time hourly wage workers must earn to afford a decent rental home at HUD’s Fair Market Rent while spending no more than 30% of the income on housing costs.

Nationwide, the housing wage is $24.90 per hour to afford a modest two-bedroom rental home. NLIHC noted that is $17.65 higher than the federal minimum wage of $7.25, and $6.12 higher than the national average hourly wage of $18.78 earned by renters. 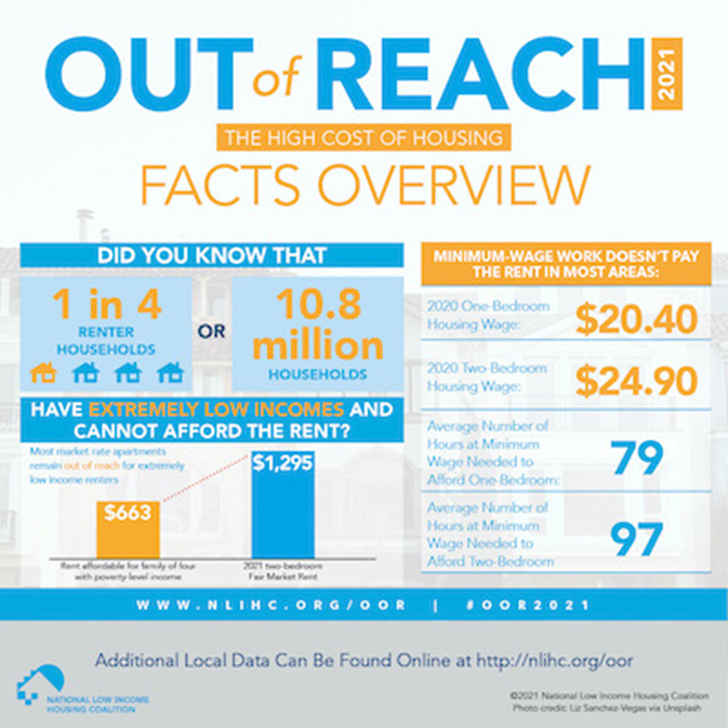 In a news release summarizing the findings, the Coalition called the pandemic an economic catastrophe for many households, emphasizing housing affordability for low-wage workers disproportionately impacts people of color.

Among key findings NLIHC revealed were:

The news release also stated: “Throughout the pandemic, millions of renters were at grave risk of contracting and spreading the virus as they struggled to pay their bills and stay in their homes, and many accumulated rental debt. One reason the pandemic was also an economic catastrophe for so many households is because, even before the pandemic, they could not afford their homes.”

People of color were disproportionately hard hit during the pandemic, which NLIHC said is a consequence of “historic and continuing racist housing policies and practices.” Black and Latino workers earn less than their white counterparts, and households of color are more likely to spend more than 30% of their incomes on housing. According to the “Out of Reach” report, 41% of Latino and 43% of Black households are cost-burdened, while only 25% of white households are in this category.

“Housing is a basic human need and should be regarded an unconditional human right,” said NLIHC President and CEO Diane Yentel. “With the highest levels of job losses since the Great Depression and an ongoing global pandemic, low-income workers and communities of color were disproportionately harmed. The enduring problem of housing unaffordability requires bold investments in housing solutions that will ensure stability in the future. Without a significant federal intervention, housing will continue to be out of reach for millions of renters.”

The Coalition believes millions of renters will continue to struggle even if the economy recovers rapidly and completely from the downturn caused by the pandemic.

The National Low Income Housing Coalition, founded in 1974, is a nonprofit organization that aims to expand and preserve housing for people with extremely low incomes. It seeks to achieve socially just public policy to ensure people with the lowest incomes in the U.S. have affordable and decent homes.