Battle of the Barristers draws 730+ participants

Over the course of three hours, moderator Mike Spence, a partner at Helsell Fetterman, presented five scenarios developed in part from actual cases. He then invited the panel of barristers to discuss, debate and determine winners, losers or lessons learned. Taking part were: 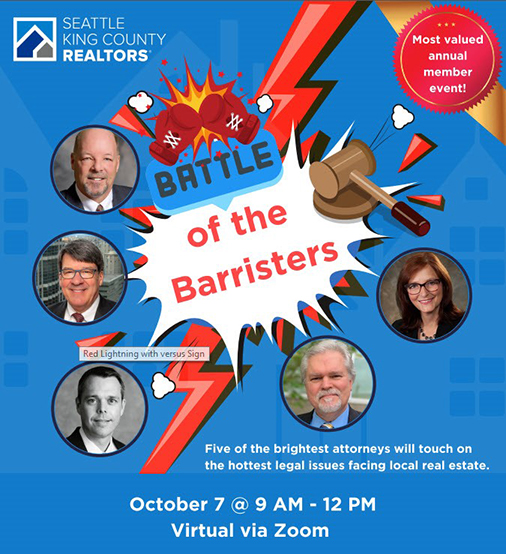 To open the program, Spence outlined the first scenario titled “The Earnest Money That Never Was,” in which a broker listed a property at $100,000 under assessed value, specifying an offer review date on Tuesday (three days later), hoping to start a bidding war. While enjoying herself at a resort in Florida, the broker receives a call from a colleague in her office with an offer of $25,000 over the listing price. It included $15K in earnest money, no contingencies, and an escalator of $5,000 over any competing offer capped at the assessed value. She neglected to mention the counteroffer expiration date is in two hours.

On Monday when the listing broker signs into her laptop, she realizes the counteroffer deadline had passed, but nevertheless sends the offer to her client, who signs and returns it. Later in the day, the broker flies back to Seattle and upon landing finds 25 other offers in her inbox.

Thinking she has mutual acceptance, the listing broker notifies the other buyers’ agents of the acceptance of an early offer. She is subsequently informed by her co-worker that her clients are backing out due to poor phone and cable coverage at the listed property. That broker submits a Form 51 (Recission Agreement) calling for the $15,000 to be disbursed to the buyers. Those funds had not been deposited. The listing broker contends the contract had been mutually accepted with no contingencies, that bad connections/coverage were not grounds for termination, and that there was a breach for failing to deposit the earnest money.

In discussing this scenario, Neste advised brokers, “If you won’t be available, subagency is for you.” He said what the seller sent back after the expiration time would not be accepted. Osborn said what transpired was “a complete abandonment of strategy” (to induce a bidding war.) Even though a review date is not enforceable, and buyers can accept offers anytime, Osborn said deviating from a published review time “creates a disorderly situation.”

The barristers also reminded brokers of the risks of oral bidding wars and pricing below an assessed value. Fitzsimmons questioned the use of Form 51, calling it “silly,” noting an offer that didn’t exist cannot be rescinded. The attorneys also reminded brokers of the importance to timely provide offers, using correct forms, and reviewing offers and documents with their managing broker “before embarrassing themselves.”

The second scenario, titled “The Realtor® Who Became a Remodeler,” involved a broker “who had done some remodeling” and who had friends who were contractors. This broker recommended the seller undertake some home improvements to boost the property’s value. Upon obtaining agreement, the broker, at the suggestion of their Designated Broker, prepared a custom addendum to the PSA, which authorized the broker to hire vendors for recommended remodeling and upgrades for a set amount. The addendum also specified payments to vendors would be made via the broker, and the “broker is facilitating the project on Owner’s behalf and is not managing the project.”

Due to a series of circumstances, the projected costs and timelines changed significantly, causing financial problems for the seller and her daughter, who was covering the remodeling costs. Once listed, the house sold for considerably more than anticipated, but the clients were unhappy at the delay and cost overruns.

The barristers identified several risks in this scenario, saying the broker’s conduct was risky and raised questions about conflicts of interest. Among other concerns were whether the broker was acting as a contractor without being licensed, and whether the relationship with contractors (friends) was disclosed. Best practices would include hiring a general contractor, not handling the money for the project, and making sure the seller interacts with the contractors.

There was also discussion about the “custom addendum.” Fitzsimmons said it doesn’t matter how good your language is – “if actions are different than contract language, it won’t save you.” Tingvall agreed, saying the broker stepped over the line, adding, “Being a builder is even riskier than being a broker.”

Osborn said that while brokers can offer suggestions and advice on improvements that would increase value, they should distance themselves from the process. Spence emphasized, “Don’t act as a general contractor without being registered. It is illegal and there are consequences.”

The next scenario, “The Phantom Proof of Funds,” involved a transaction with an inspection addendum, a financing addendum, an evidence of funds addendum and a closing date 30 days after the offer was presented. Emcee Spence noted it did not contain a Buyer’s Pending Sale of Property Addendum because of an oversight by the buyer’s agent. Three days after submitting their Form 21, the purchasers submitted proof of funds but at an amount substantially below what was in the financing addendum.

A week later, the inspection revealed “several significant defects,” prompting a Form 35R from the sellers seeking a price reduction in exchange for a waiver of the inspection contingency. Sellers rejected it and sent the would-be purchasers a Form 90EF terminating the transaction for lack of sufficient funds. Two days later (about two weeks before the stated closing date), upon closing the sale of their home, the buyers had proceeds that far exceeded the promised down payment amount.

The panel agreed the termination was valid, but the case raised the possibility of a claim for fraud because the broker failed to do her job. One of the attorneys stated “I don’t think the sellers did anything wrong. The buyer has a window to get the evidence of funds.” Neste noted Form 22EF documents funds (cash or cash equivalent) that a buyer actually has. If that’s not true, it is a breach of promise. Fitzsimmons suggested checking default language (10 days) for providing such evidence. “If buyer failed to timely deliver, seller has an automatic right to terminate the transaction once the deadline is missed.” Spence recommended requesting the EF form at mutual, saying doing so is a good practice.

The attorneys also discussed the use of Form 51 and applicable dates, suggesting, “Be careful telling sellers they can immediately put their house back on the market.” Tingvall emphasized an offer to rescind is not a termination or even a breach. Neste cautioned, “Escrow may like to see Form 51, but this case highlights where this form can bite you in the butt.” Osborn recommended using a different escrow company if these is a second sale. Fitzsimmons reminded the audience the best practice if there is any question about a seller’s ability to sell their house to someone else, is to talk to a lawyer. “Every broker has an obligation to comply with the language in the agreements,” she emphasized.

Scenario #4, “The Changing of the Deeds.” This case involved a couple who made an offer at the list price, which the broker set even though CMAs indicated it could have been priced for $75,000 more. When the seller questioned the broker’s advice, the broker assured them by saying, “There are bidding wars all around you, and I can almost guarantee that one will happen here.”

The buyer included a Financing Contingency with their PSA. Upon issuing a Notice to Perform, the buyer’s broker sent a Form 34 waiving the Financing Contingency but adding one of the couple’s parents as a buyer. The following day, the buyer’s broker advised the listing broker that a different lender was found who did not need the parent on the loan. The paperwork proceeded and the seller signed the deed and excise tax affidavit. The following day, it was discovered escrow swapped the front page of the deed, replacing it with one that included the parent.

The attorneys discussed whether the transaction could be unwound and what the broker did right or wrong.

The final case, “The Dysfunctional Sellers.” Scenario #5 concerned an in-house sale of a $5 million home with only an inspection contingency. Upon receiving Form 17, the buyer’s broker noticed several questions were unanswered. On the day of the inspection, the buyers were accompanied by a contractor, who, unbeknownst to the buyer’s broker, turned out to be that broker’s spouse.

The inspector’s report documents evidence of roof leaks, prompting the buyers to demand a $50,000 price reduction. The parties compromised, agreeing to $25,000. Subsequently, the husband-contractor uncovers other problems, which necessitate the entire replacement of the roof at a cost of $75,000.

One focus of discussion for the barristers were the failure to complete Form 17 and the inspection that identified apparent roof leaks. Tingvall said the buyer’s broker should have advised further investigation pertaining to the leaks. He also cautioned brokers about the differences between incompleteness and the risks of having knowledge of an error, inaccuracy, or omission.

Osborn, citing the Douglas v. Visser case, said the buyer had knowledge and needed to “figure out how much of the iceberg is below the water.” He also said he was concerned that the broker breached reasonable duty and skill. “Make sure questions on Form 17 are all answered, and if not, bring it to the attention of the seller,” he advised.

The barristers also noted tendencies for would-be buyers to forgo inspections in a competitive market, concluding, “An inspection contingency can be beneficial.”

Chase was the main sponsor for this year’s Battle.

More than 90% of the brokers who participated in the 2021 Battle of the Barristers qualified for continuing education clock hours.

This year’s event continued the tradition of earmarking proceeds to the First Citizen Scholarship Foundation, a not-for-profit 501(c)3 organization that has been providing educational scholarships since 1999. Since inception, $487,000 in scholarships have been awarded to 282 students. The next round of scholarships will be awarded in mid-April. 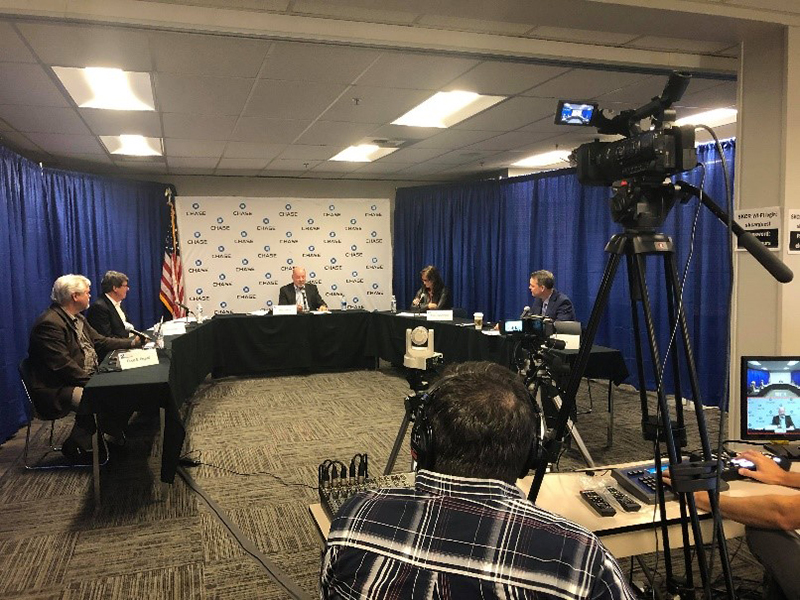