One of Washington’s most respected politicians, Daniel J. Evans, has written his long-awaited autobiography. His “90 years of memories,” as he describes it, just became available for purchase at the Secretary of State’s website. 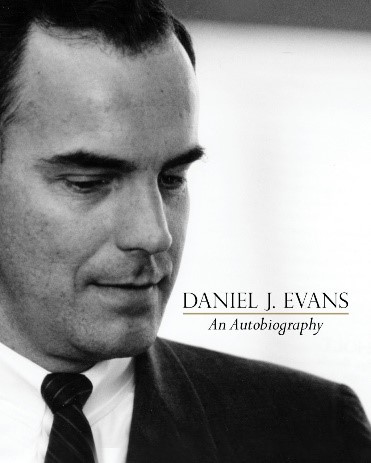 The Seattle native and University of Washington alumnus is distinguished by his service in many positions, notably as the state’s first three-term governor and as a U.S. Senator. Now 96, his only election defeat occurred at Roosevelt High School where he lost a bid to be junior class president.

Evans became Washington’s youngest governor in 1964 at age 39, but the stateman’s career in politics started in 1957 upon his election to the Washington House of Representatives from the 43rd district. Although he concluded his service as an elected official in January 1989, he has remained active in the community as a consultant and member of numerous boards.

In his book, reflecting on the shooting death of Rev. Dr. Martin Luther King Jr. while he was governor, Evans writes: “Thinking about my wife and our three young sons, I seriously considered whether it was worth continuing to face the turmoil and danger of political office. As I weighed Dr. King’s bravery and my commitment to public service, I realized that danger was part of the job, and that I was probably at greater risk traveling the freeway than facing an attacker.”

At an event to commemorate his 95th birthday, Evans was honored for his achievements on many fronts, from creating wilderness areas and the state’s community college system to welcoming Vietnamese war refugees to the state and “standing against a rancid partisan divide.” In between his stints as governor and senator, he served as the second president of The Evergreen State College (1977-1983). 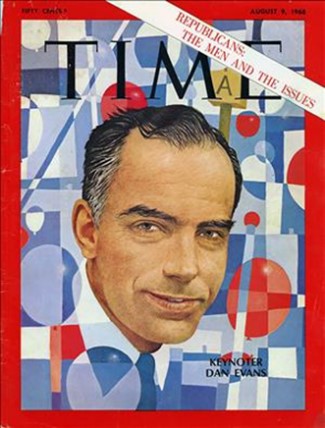 give the keynote address at the Republican National Convention, in part “to represent a new and dynamic face of the Republican Party,” according to HistoryLink. The Seattle Times described his speech as “an articulate call for change,” and one that remains relevant more than 50 years later.

Before embarking on his political career, the state’s 16th governor served in the United States Navy after high school, from 1943-1946 and 1951-1953. In between, he attended UW, graduating in 1948 with degrees in civil engineering.

Both Evans and his wife, Nancy Bell Evans, are known as tireless civic volunteers. She has been a founder and/or leader of numerous organizations, including Friends of Cancer Lifeline, Planned Parenthood of Olympia, First Ladies’ Mental Health Month, and the Governor’s Mansion Foundation. Also notable are the couple’s commitments to the arts and higher education.

Dan and Nancy Evans, the parents of three sons, are the recipients of several awards for their community service. In 2003, they were honored as the Seattle-King County First Citizens.

Nancy Evans is the subject of a book by John C. Hughes titled Nancy Evans, First-rate First Lady. One reviewer of the biography and oral history describes it as a “fascinating story of an effervescent, wise and very accomplished woman who, through her many contributions, left her stamp on Olympia and the State of Washington. That book is also available in the Legacy Project collection at the Secretary of State’s office.

Also in the Legacy collection is another book by Hughes titled Slade Gorton: A Half Century in Politics. Gorton, who died at 92 in 2020, was the 2010 Seattle King County First Citizen.

About the Legacy Project

Legacy Washington documents the lives and achievements of some of the state’s most renown citizens. The collaborative venture, spearheaded by current Secretary of State Steve Hobbs, features exhibits, stories, videos and other material from the Washington State Library, the Washington State Archives and heritage organizations across the state.