As municipalities wrestle with ways to provide affordable housing, representatives from the public and private sectors are working to clarify – or create – regulations to allow small homes (often known as Accessory Dwelling Units or ADUs) in backyards.

ADUs may be defined in different ways but are generally considered to be a second (or “accessory”) dwelling on the same lot as a primary home. Whether described as a backyard bungalow, a granny pod, an in-law suite, laneway house, tiny house, backyard cottage, ancillary unit or by any other term, these units may be incorporated into an existing dwelling or built as a standalone unit.

In the city of Seattle, a separate living space within a house or on the same property may be referred to as an ADU, but such units are not legal unless that have been established through a permit process. A legally permitted unit, called an attached accessory dwelling unit (AADU), or detached accessory dwelling unit (DADU) is limited to 1,000 square feet in a single-family zone, including RSL, and must meet current standards of the Seattle residential, building, mechanical, electrical, energy, land use, environmentally critical areas, and shorelines codes that apply to single family dwellings.

Northwest Multiple Listing Service offers a variety of options to search for residential homes with separate living spaces or an accessory dwelling unit. The search criteria include parameters for “approved” ADUs (AADU) that have been permitted as a rental by a local city or county. 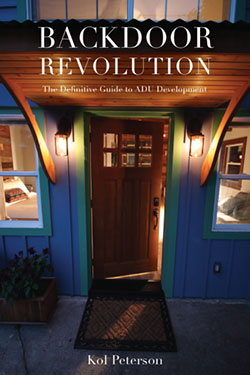 Portland, Oregon is recognized as having the most ADUs of any jurisdiction in the country, but ADU consultant Kol Peterson says such units only make up one percent of the housing supply. Peterson authored a 358-page book on the topic and manages a website/online resource on building an ADU.

In an interview with On Common Ground, a free semi-annual magazine published by the National Association of Realtors, Peterson said some jurisdictions are scared of this new housing phenomenon “because they perceive it’s going to alter the fabric of their neighborhoods. They worry about parking, and they worry about their single-family neighborhood becoming a slum.”

Rodney Harrell, VP of Livable Communities and Long-Term Services and Supports at AARP’s Public Policy Institute, said AARP is making support of ADUs a pillar of its plan to dramatically increase the supply of affordable housing for seniors. It offers two free downloadable publications:

He notes by 2035 there will be more people over the age of 65 than under the age of 18. “The trend more and more is for cities to open up to ADUs,” he added.

Seattle is one such city.

At a signing ceremony to commemorate the new rules, Mayor Durkan acknowledged the housing crisis, saying Seattle has a responsibility to grow the supply of housing options as quickly as possible. “We need to use every tool in our toolbox to boost the supply of housing. That’s why we are knocking down barriers for homeowners to build more backyard cottages and in-law units. With this legislation and my new Executive Order, we can address the serious regulatory, financial, and permitting challenges for backyard cottages and in-law apartments in Seattle,” she stated.

Seattle’s new regulations became effective on August 8. (The city has allowed detached ADUs located on the same lot as an existing residence since 2010.)

In response to the new legislation, the city announced intentions to develop pre-approved plans for DADUs (detached accessory dwelling unit) to simplify and streamline the permitting process, and to develop an affordable ADU financing option. Homeowners who choose a pre-approved DADU are promised a shorter permit review process and reduced permit fee.

In the meantime, Seattle’s Department of Construction and Inspections (SDCI) has published two tip sheets for property owners who are interested in creating an ADU.

The growing acceptance of ADUs and DADUs prompted Seattle King County REALTORS® to create a continuing education class, with sessions scheduled for Nov. 14 (which is sold out) and on Dec. 2. The class, approved for 3 clock hours, addresses the legal requirements for ADU’s, the steps of the ADU approval process, and the costs and financial benefits of ADUs.

Entrepreneurs are also embracing opportunities to create the smaller second homes as local and state governments relax their zoning rules. In Portland, for example, the number of ADU permits jumped from 86 in 2010 when the city began waiving impact fees, thereby making them significantly less expensive, to 660 in 2018, according to AccessoryDwellings.org, a volunteer-run resource. Permits jumped even more dramatically in California after a state law passed in 2017 forced cities to relax ADU regulations.

Seattle anticipates the development of ADUs and DADUs will more than double to about 4,400 through 2027.

The “Accessory Dwellings” website includes various resources, such as a table of state-by-state rules for creating ADUs (with links to regulations in Olympia, Seattle, Spokane and Tacoma), and a roster of ADU Professionals.

Among the pros in Washington is MyKabin.com, a Bellevue-based startup whose “one-stop” offerings include permitting, site preparation, a unique foundation system, utility connections, construction and inspections for DADUs. Owners select the size, style, colors and finishes, choosing from four sizes that range from small (at 270 sq. ft.) to extra large (topping out at 1,000 sq. ft.).

The founders of MyKabin say they have engineered a workaround to streamline development. The concept, which they call “a 90 percent fit” is purported to work in 90 percent of King County’s lots eligible for DADUs. Its website includes a search tool to check if DADUs are allowed at a particular address.

MyKabin strives to use local resources and suppliers, and says most of their Kabins are move-in ready in about 6 weeks. Pricing starts at $49,000.

ADUs have “begun blossoming,” according to the authors of a report funded by the San Francisco chapter of the Urban Land Institute. However, they concluded, despite government attempts to reduce barriers, a widespread surge of ADU construction has not materialized.

Their report, “Jumpstarting the Market for Accessory Dwelling Units: Lessons Learned from Portland, Seattle and Vancouver,” cites California researchers who suggest these small-scale infill developments could account for as much as half of new development capacity in coming decades.

The authors of the report conducted surveys and interviews in an effort to help policymakers enact more effective reforms. To date, they found no city has developed a comprehensive and fully effective approach to assisting homeowners with financing ADUs.

As part of their research, the authors asked survey respondents to reveal what they wished they had while developing their ADUs. Among the wishes by those who responded:

Three factors are key to the success of ADU implementation, the authors stated.

The authors also suggested growth in ADU construction could accelerate and reach a wider constituency if cities collaborated with lending institutions, “particularly locally-focused ones such as credit unions,” if homeowners could borrow against the future value of the asset they seek to build on their own properties.